When The Hired Hand Was A Soldier Boy

Darlene Reid donates countless hours at the Gilbert Museum where she volunteers weekly with the live quilting bee.
She is also a main contributor with their Annual Quilt Show.
I was especially interested in seeing what quilts she would be showing this year, as I'm always drawn to the vintage patterns she recreates. 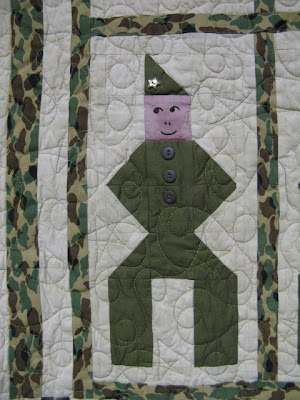 Darlene wrote: When The Hired Hand Was A Soldier Boy was made from an August 1945 quilt pattern published in the Kansas City Star Newspaper. It is in the long, narrow style typically used on a bed for a hired hand."
I found it interesting to note that the pattern was published in 1945, the year WWII ended. 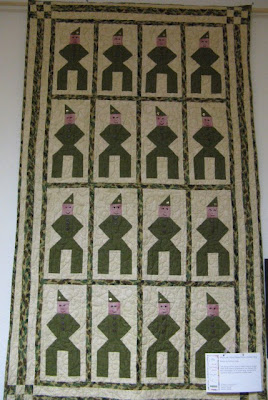 Darlene completed her quilt in 2010.
A pattern that can be used as much today to honor our soldiers. 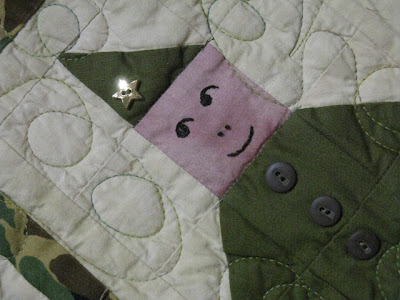 Darlene often finds vintage patterns that use squares and half square triangles to form an image, and then adds her own embellishments to make the pattern "hers". 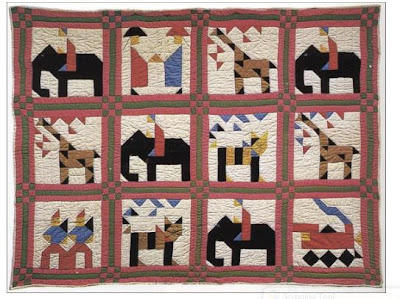 Darlene was the one who shared the Circus Quilt I fell in love with (see post 1/25/12)
Soldier Boy is very similar in design with the "twins" block in the bottom left corner. 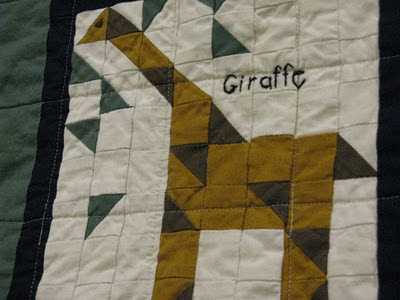 You can see a little more clearly with the giraffe block how the image is pieced with squares and half square triangles.
Tomorrow I will show you two political quilts Darlene made using the same type of pattern.

The Kansas City Star newspaper published over 1,000 quilt patterns from 1928-1961.
You can collect all of the patterns by subscribing to My Star Collection
Posted by Nedra at 12:01 AM

The soldier boy quilt looks like it is an antique. What an amazing quilter.

I just love the soldier boy (I have one of my own -- the human kind). And my very favorite animal besides Abby is a giraffe. Very talented lady.