Our main motivation for traveling East on Saturday was to see the town of Safford, and the nearby communities of Thatcher and Pima. 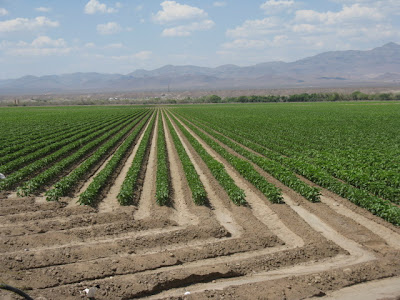 This was the first time either of us had visited this part of Arizona.
As we arrived we noticed that nearly every available land space, clear up to the two lane Highway 70, was planted in cotton.
Rows upon rows of Pima Cotton. 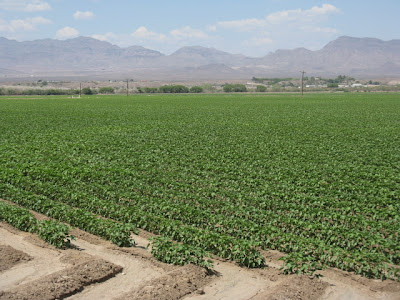 I had heard of Pima Cotton, and we even have Pima cotton sheets on our bed.
As a quilter, who mainly works with cotton fabric and cotton thread, I was especially interested in learning more about the history of cotton in Arizona. 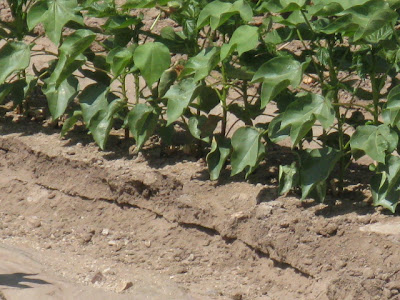 This type of cotton is named after the Pima Indians who helped raise cotton on U.S. experimental farms in Arizona in the early 1900's.
Pima cotton is ELS (extra long staple) similar to Egyptian cotton, which makes a very durable and superior fabric.
For most of the 20th century, Arizona was the largest ELS producer in the nation, although now those numbers have declined. 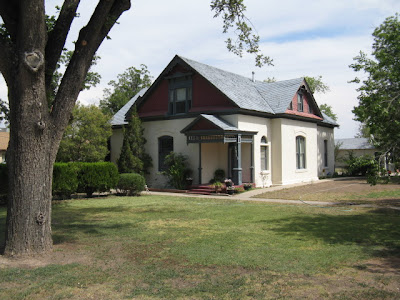 We had several reasons for wanting to visit the Safford/Thatcher area
I have always wanted to see the childhood home of Spencer W. Kimball, who was the 12th President of our church (The Church of Jesus Christ of Latter Day Saints).
I've always held great admiration and honor for this wonderful man. 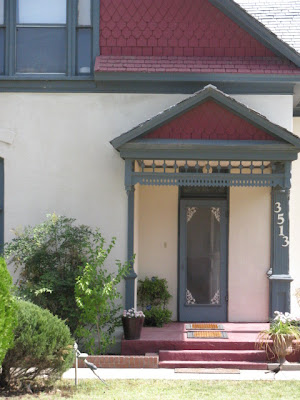 President Kimball's father Andrew was called to serve as a Stake President here in 1898. The church members provided 10 acres for his family, and the adobe and brick home was completed in 1902. Andrew helped make the 12,000 adobe bricks used in construction.
President Kimball lived here from age 7-22, when he left to be married. 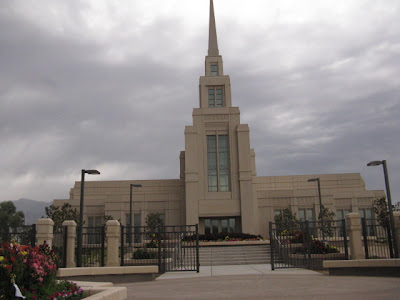 In the near vicinity, the Gila Valley Temple was constructed in 2010.
Even though this is a small temple, the interior is magnificent.
We spent a few hours inside, and when we came out the skies were black as a huge dust storm and high winds were intensely blowing whirlwinds of sand and dirt through out the valley. 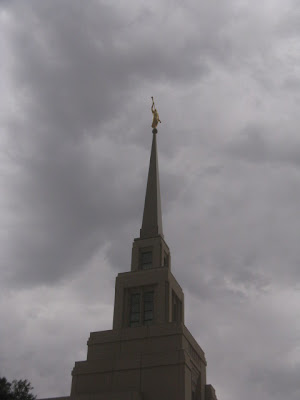 The winds were so intense that we struggled in making it back to our car in the parking lot.
Not knowing when we will be back, I pulled out my camera and braved the weather to capture a few pictures. 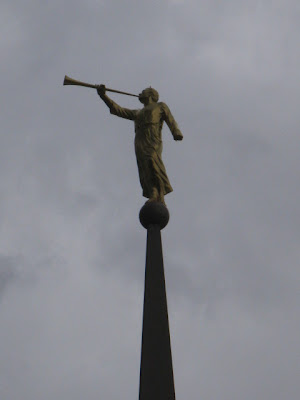 The Angel Moroni sits atop most of our temples and is the unofficial symbol of The Church of Jesus Christ of Latter Day Saints, often referred to as The Mormons.
Posted by Nedra at 12:01 AM

when we traveled though New Mexico and parts of Texas we have seen cotton grown there as well - I didn't know Arizona produced as well. Interesting what we find out when we get out to explore. My nephew and his wife have lived in Phoenix for about the same amount of time as you and your husband have and I think the only things they have seen are stores and clubs! they do not plan to have children and are in their late 30's they do not seem to be interested in seeing historic things or places of interest just places to shop and drink!
Karen

Just wait... When those plants are budding white, it is gorgeous! Like snow!

I've followed your blog for quite some time. I'm so impressed with your quilts, the quilts of others you showcase, and how well you express your love for the gospel. I have lived in the Gila Valley all my life (in fact our family has been here for 5 generations) and was excited to read your post this morning. I hope you can make it back in the fall when those cotton fields are "white already to harvest." Many a missionary serving here have sent pictures home with them standing in the cotton fields.

Cindy, your comment came to me as a no-reply, so I will respond here. Thank you so much for the visit and your kind words. I would LOVE to return to the Gila Valley in the fall and to see the cotton when it's ready to harvest.

I never knew that about Pima cotton. Thanks for sharing.

What a great trip!!! And wonderful pictures, thank you!! Oh, and I love Cindy's comment!! LOL!!!

That is very interesting...about the pima cotton. I didn't even know that Arizona farmed cotton. My mom served her mission as a senior sister in Tucson, and was in Thatcher. She said the members were so nice there :)

I loved President Kimball. I always thought the small town of Thatcher AZ sounded like the perfect place to call home.
Glad you got to spend some time in Thatcher.

I tried to grow cotton in our garden one year. Absolutely beautiful flowers but our growing season in northern Illinois is WAY too short! I got start of little cotton "balls" - but that was it. Didn't try cotton again! Interesting to learn about Pima cotton!

I'm fairly new to your blog, but have been glad to discover it. We live here in the Gila Valley and my husband is a cotton grower. Some of those fields you passed on your way in to town were ours! I also serve in our Gila Valley Temple, and President Kimball was a personal family friend of my grandparents. So I especially related to this blog entry. Come back & see us sometime!

Jan H.- Your comment also arrived as a no reply e-mail, so I will respond here.
How wonderful to meet the farmers who planted those immaculately cared for cotton fields. I've never seen such even rows. Very impressive! What day of the week do you serve in the Gila Valley Temple? We would love to come back sometime.

Love this post. How fabulous that you could go there. President Kimball was a favorite of mine. I find that I don't appreciate the prophets until they have passed. Weird of me.

Love this post. How fabulous that you could go there. President Kimball was a favorite of mine. I find that I don't appreciate the prophets until they have passed. Weird of me.