I've always had an interest in Fan Pattern quilt blocks.
They just call to me.
I've collected a wide variety of Fan Patterns, and I'm always on the lookout for diverse ways this simple design can be put together.
(In fact, the current project I am working on is just one variation of a fan pattern) 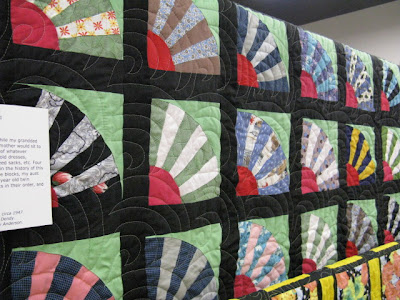 While I was visiting the Gilbert Museum's Art of Quilting Show my eye went to a vintage fan quilt tucked quietly away in a small side room.
Owned by Roland Dendy
Completed 2012
Blocks pieced by Mrs. Faye Dunnam, circa 1947
Blocks sewn into quilt top by Roland Dendy
Long Arm Machine quilted by Dorothy Anderson 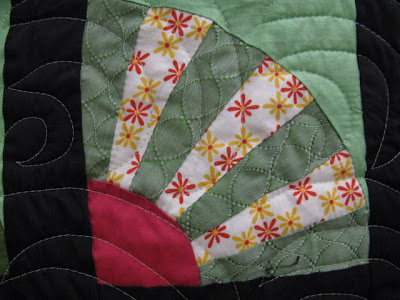 One of the delights of viewing vintage quilts, is reading the stories of days gone by, where the culture was quite different than what we experience today. 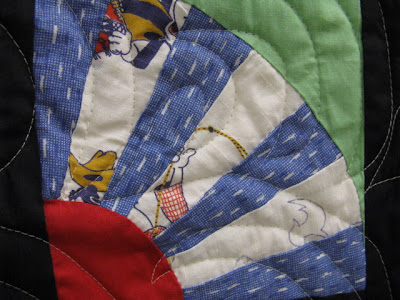 Roland shared "In the 1940's and early 1950's while my granddad watched TV wrestling, my grandmother would sit to the side and piece quilt tops out of whatever materials were available to her: old dresses, remnants, flour sacks, chicken feed sacks, etc." 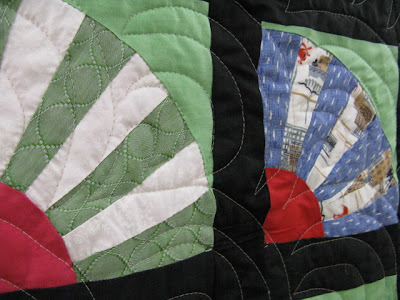 What a wonderful family memory!
Roland's words made me smile.
I felt an emotional connection with grandmother Faye, even though I've never met her.
I think if wrestling was the main program being watched on TV I, too, would be sitting to the side piecing quilts with what ever fabrics I could get my hands on! 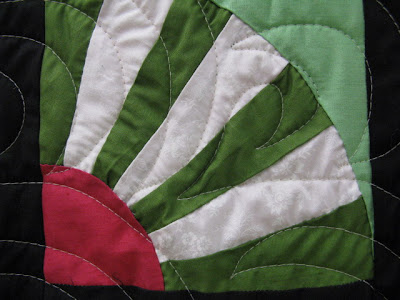 But, it's also important to put into perspective the TV culture of 1947.
There were only 14,000 television sets in the United States, mainly being viewed on 3 channels.
During that year the FCC rejected the introduction of CBSs' color television system.
(those newfangled contraptions!)
Maybe watching TV on your own set would be the highlight after a long work day, wrestling and all.
Roland added "Four generations have been involved in the history of this quilt. My grandmother pieced the blocks, my aunt passed them on to me, my nine year old twin granddaughter's placed the blocks in their order, and I sewed them together."
This is what quilting is about! 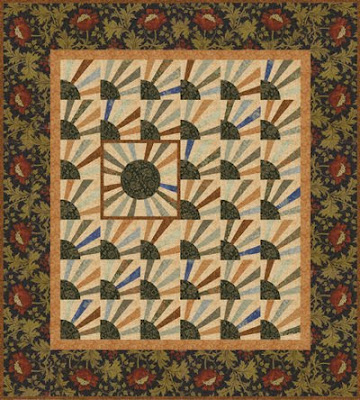 Recently Barbara Brackman published a free Fan Pattern block on Moda Bake Shop
Make It Modern for Morris and Company can be found HERE.
Posted by Nedra at 12:01 AM

I love fan quilts too and have a few planned to make
someday, soon hopefully
thanks for sharing
Kathie

Nedra, I love fan quilts as well. I made one in crazy quilt style (not quilted yet). Must show it off one day. I like your collections...

What a fun quilt with such an interesting story...thanks for sharing
Mary

So pretty! And thanks for sharing the history too. It made me smile because I often quilt while watching/listening to WWE wrestling... it's my secret addiction! ;)

I'm a lover of fans, too. One of my favorite quilts I've made is a fan. Love these.