Our grandson Noah is all boy.

At age 4 he can be serious at times. 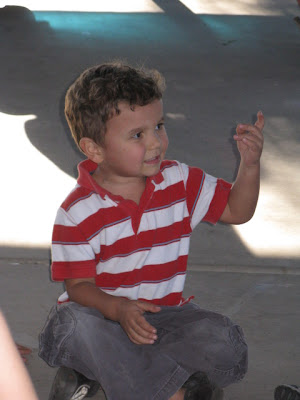 When he smiles his dimples come out, and if I can get him to sit still for half a second, I love to run my fingers through his beautiful curly hair.
From the moment he was born, Noah has been keenly aware of everyone and everything around him.
He shows his emotions openly, and I'm constantly amazed at his intellect, and how much he perceives at such a young age.
I feel joy just being near him. 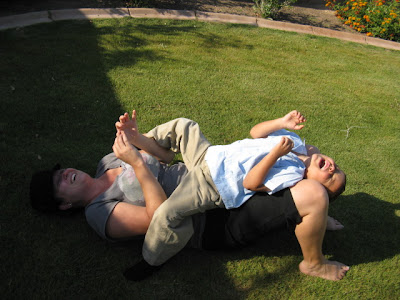 Noah spends most of his free time trying to find someone who will wrestle with him, and especially loves his Aunt Aubrey who indulges him often.
We've nicknamed him Noie-Kablowie. 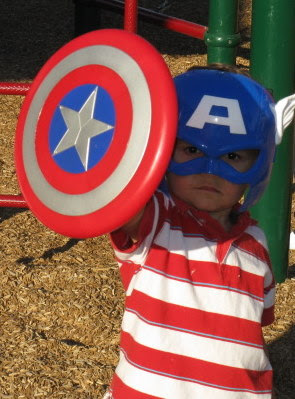 In his world, he would be Captain America and fight the bad guys. 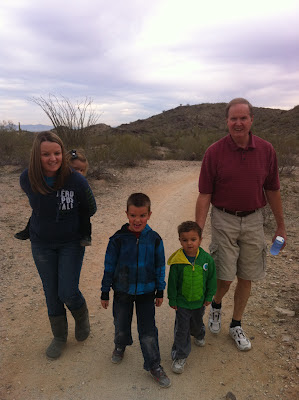 Our daughter Amy is a wonderful mother, who spends hours with Noah each day, finding activities that will keep him happy while his older brother is at school, or while his younger sister naps.
I was especially curious to see Noah's perspective of his mother, with notes written down by his teacher at church. 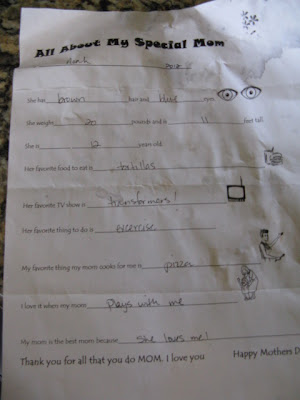 According to Noah, his mom has brown hair and blue eyes.
(During those snuggle times, he has paid attention to the details of her face)
She weighs 20 pounds and is 11 feet tall.
(Tall enough to be a superhero who keeps him safe)
And she is 12 years old.
(He can count to 100, but numbers are still a little confusing)
Her favorite TV show is Transformers.
(Amy laughed at that one. Guess who really likes Transformers the best?)
Most of all Noah loves it when his mom plays with him, and he knows she is the best mom because he feels loved.
From my perspective, that makes her the true superhero.
Posted by Nedra at 12:01 AM

What a wonderful post Nedra, you have a beautiful grandson and daughter - they're like a magazine family!

Your grandson seems to be as beautiful inside as outside - lovely that his mother means so much to him. I wish more mothers were able to stay home with their children in their before school years.
Karen

What a charming post! I love his perception of his mommy. Isn't that such a great age? As well as being very sharp, he is adorable.

What a lovely post and what a gorgeous (inside and out) family you have!

that is one beautiful little boy.
and i love that his mom's favorite food is tortillas.
no doubt!
mine, too.
what a cute post!

What a cutie! Love that list. :) Our grandson made a similar one in his class at school. Such fun!

What an adorable little boy! That is such a darling story.....I love his perspective. Isn't being a grandmother grand?