A Show and Tell from Darlene Reid who was GIVEN this beautiful red and pink Grandmother's Flower Garden.
Yes, you read that right.
People often offer their vintage quilts to Darlene because they know she will take good care of them and make sure they have a good home. 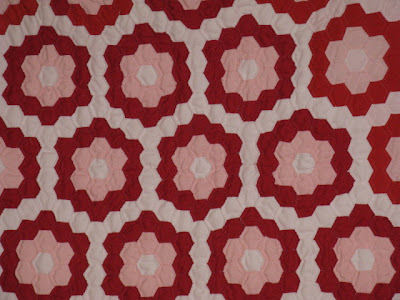 Some people rescue pets.
Darlene rescues quilts.
When she received this GFG it was stained and in great need of washing.
A common problem with vintage red fabrics is that the dyes run and bleed out onto any surrounding fabrics. 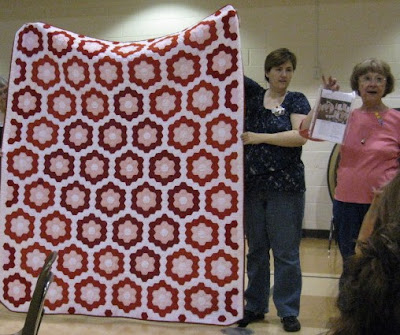 Darlene's solution was to use Color Catchers in the washing cycle.
Lots and lots of Color Catchers.
(You know those little sheets of fabric that have been treated to prevent color runs)
I wish my camera had been fast enough to photograph the pile of used sheets Darlene applied to trap the dyes that bled into the pink and white hexagons.
A lot of time and effort was put forth on the desired result. 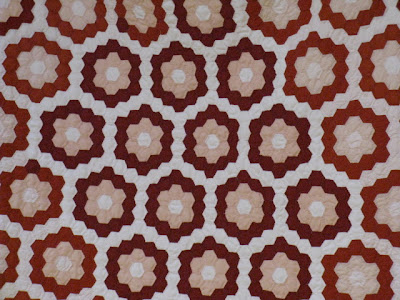 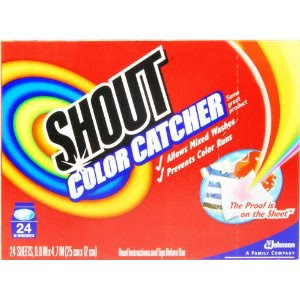 Color Catchers were invented in 1993 by Pat McNamee of Ireland, and come in several brands internationally.
In the United States, the most commonly used is by Shout, which I found on Amazon.com at $6.56 for a box of 24 sheets.
Posted by Nedra at 12:01 AM

Oh yes, Color Catchers are always in my home! They work fabulously and I do use a ton... especially with red. Every quilter needs to own some.

I keep them also and always use them when I wash my quilts. Occasionally if I have a troublesome bleed I actually baste a color catcher (front and back) to the problem area and it goes to it. I plan on using a whole box when I finally get my DJ red/white quilted and ready to wash - couple years from now?
Karen

Wow, that quilt is gorgeous. On their own the block looks a bit boring but when all put together, it really sings to me. Thanks goodness for color catchers, I love them and they've only been available here for a few years.

Love the pink and red and white.

What a treasure! I use color catchers in the wash whenever I wash a new quilt for the first time. I have found that good quality fabrics don't leave much color behind, but better to be safe than sorry! A great invention!

I have to tell you that I had a color catcher actually take the dye right out of some fabric. I had a quilt that bled. I used 2 color catchers and one part of the quilt was "spoiled" because of it. I gave it away it made me so sad. I've never heard of that before or anything but I'm more careful with them now and never use more than 1.

They sell these at WalMart and almost every grocery store and they are a lot less expensive too.

wow, it is beautiful. the colors remind me of valentine's day.

i think i need to be on the lookout for some new friends. the kind that have vintage quilts in need of a new home. i'd pinky swear to give them the tlc they deserve forever!

This is my favorite pattern ever and it is so great you could share this with us! Awesome for us and our Grandmother's sure missed out didn't they?

I've used the dye catcher made by Carbona for years. They are made of cloth and are good for a LONG time! I actually found some (come in a box - 1/box) at Big Lots! I know people who don't separate ANY of their wash - just throw in a dye catcher! I can't seem to do that!! Thanks for sharing! My Dear Jane bled on one of the red blocks when I was "rinsing" off the blue quilt lines! It made me so sick I folded it up when it dried and put it away! Guess I'll try the dye catcher trick! Crossing my fingers!

Be still my heart. What a beautiful quilt.