The Power of Premonitions

I've had quite a few people e-mail me asking what kind of audio books Mr. Cactus and I listen to on the 6 hour drives we often make between Utah and Arizona.
I usually let my husband make the selection because I always find his choices very interesting, plus it gives us something to talk about.
Most have to do with business, and often address the psychology of business such as Blink (by Malcolm Gladwell) "The Power of Thinking without Thinking" as it relates to behavioral economics. 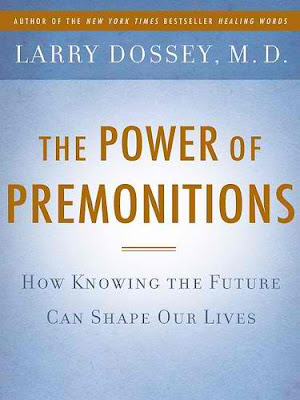 Our latest "listen" was The Power of Premonitions" by Larry Dossey, M.D.
Dr. Dossey is a former Internist and Chief of Staff of Medical City Dallas Hospital.
He is heavily involved in the role of the Mind in Health and role of spirituality in Healthcare.
He has also been on Oprah several times, and his book is on the Oprah Book Club list.
Dr. Dossey defines premonitions as "A glimpse of the future, a feeling or sense that something is going to happen."
The book starts with examples of some very thought provoking cases and then moves on to evidence collected through scientific studies.
Premonitions most often come through dreams, and are often unconscious feelings.
One example came from a small town in Nebraska where there was a church explosion. The curious part was that no one was in the building at the time. All 15 members of the church choir for one reason or another did not show up for choir practice that day.
Dr. Dossey writes that the ability to predict is real and that most of us possess it.
"Knowing the future can help you have a future.
Premonitions are often about survival. They warn us of future dangers — health problems, impending accidents, disasters, and so on.
For example, research shows that people often avoid riding on trains the day they crash, compared to normal days. On days of the crash, the vacancy rate on the train is unusually high.
This type of premonition is usually unconscious. People don’t say, “The train is going to crash. I’m cancelling my reservation.” They usually report a vague sense that something is wrong or doesn’t feel right, and they find some reason to change their plans."
I really enjoyed listening to this book. It made me think of the premonitions I have had in my life. Ask any mother and she will be able to tell you stories of "mothers intuition" with her children.
What do you think?
Posted by Nedra at 5:00 AM

Nedra - Interesting stuff. My Dad had a premonition in January that I hope doesn't really happen!! Only problem is that my brother confirmed it with his "feeling". Great post, thanks!! Kris

How interesting. Yes, I've had strong feelings about upcoming events. I'm not so sure what I might have avoided, but I sure know those feelings.

I absolutely believe this! I changed our tickets to fly from Seattle to Chicago (years ago) to a different flight. The original flight crashed in Iowa - and no one survived in the row we had booked. It wasn't out time.

This is extremely interesting. Awareness when you have a premonition probably changes a lot of outcomes.
Mary

What a fascinating book - I've made a note of it to ask our library if they have a copy. I firmly believe in premonitions. Many years ago, my husband was preparing to go for a long ride on his motorcycle - something I've always encouraged him to do, as we both love bikes. But this particular day, I had a really bad feeling, and when I told Ken, he immediately cancelled his arrangements. We never knew what might have happened, but...

Sounds interesting. Years ago I had a bad feeling about a ski trip my husband, kids and I were going on. I told my husband but we went anyway. My 14 year old soon had a serious fall and broke his Jaw in 3 places. It pays to listen to your inner feelings!!

I think that because of the information era we have less time to just listen, and those premonitions are not heard.