The happiest of moments as a parent come when you see your children work hard and reach a goal.
Congratulations to our #1 daughter Aubrey who graduated yesterday with a degree from The University of Phoenix.
We are so proud of you sweetheart!
You have been persistent, overcome obstacles, and have been dedicated to improving your life through education. 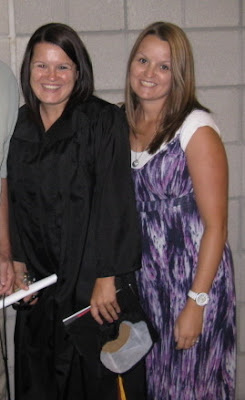 Aubrey and Amy were born 13 months apart and I had a strong vision of them being the best of friends.
It's wonderful to see them now as adults, living in the same city, spending time together often and supporting each other. 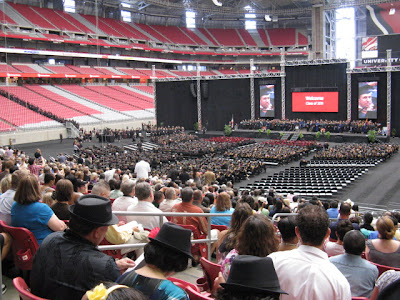 The graduation ceremony was held in the massive University of Phoenix Stadium
(go Cardinals!) 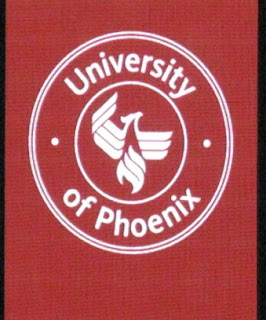 Aubrey works for the University of Phoenix (Corporate Sponsor of the Stadium) and loves her job. 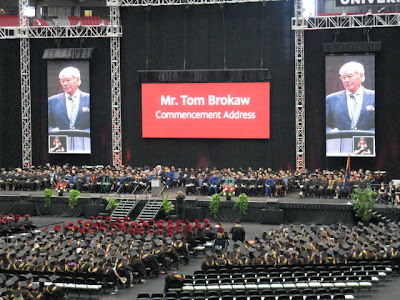 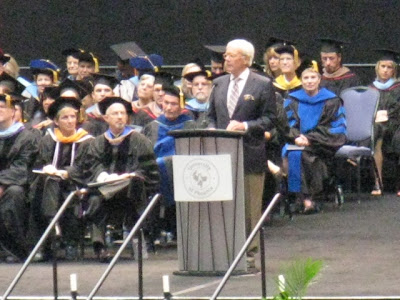 Out of all the news anchors on television, Tom Brokaw is my favorite.
For years he was my window into the outside world as I listened to him daily on The Today Show and NBC Nightly News. 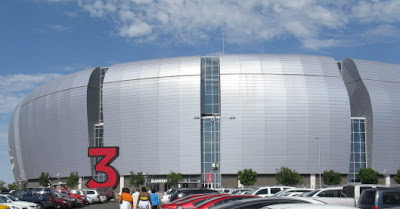 We've driven by the University of Phoenix stadium many a time, but this was our first time inside.
The Superbowl was held here in 2008, and it was the most watched Superbowl in history.
The stadium seats 63,400 and can expand to 72,000.
In fact if the stadium seats were set in a line they would stretch for 18 miles.
The exterior design represents a barrel cactus, but I think it looks more like an alien space ship that has landed in an Arizona corn field. 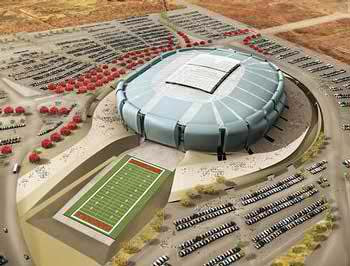 The stadium also has a retractable roof, and keep their natural grass field on a roll out 12 million pound tray.
They keep the grass outside most of the year because when it's inside it creates rain clouds.
We wouldn't have wanted that to happen during the graduation ceremony :)
Posted by Nedra at 8:50 AM

Exciting times! Congrats to your daughter.

Congratulations to your daughter! You have good reason to be so proud!

Congratulations to your daughter and Mom and Dad! Job well done!

How wonderful for your daughter. Congratulations. It was also interesting to know a little about the stadium. I had no idea they put the lawn outside and then back in. How cool is that?

Congratulations to your daughter. What an accomplishment! BTW, your blog list is posting kind of funny. When you click on one of them, a strange looking page opens. Just thought you'd want to know.

Congratulations to Aubrey and the proud parents!!!

Congratulations! Of course you are so proud of her accomplishment! Nice job making your parents proud, Aubrey!

congrats!!! nothing better then a college education.
Thats great she stuck with it and finished.
Kathie

congratulations to your daughter on her achievement and you are so right to be proud. Nice that you had an interesting speaker to listen to as well - I think I spent most of my adult life listening to Tom on tv.
Karen
http://karensquilting.com/blog/

Congratulations to Audrey and also for getting her to this point in her life. You obviously did a fabulous job.

Thanks Mom! It was fun to have you there :) I appreciate the support :)

Congratulations to you and to your daughter Aubrey.