As I've mentioned before, Mr. Cactus and I drive back and forth between Southern Utah and Arizona frequently.
This last weekend we decided instead of the traveling the usual route through Las Vegas, we would take Hwy 89 that meanders past Lake Powell and Flagstaff, AZ.
At 7,200 feet, temperatures are delightful in Flagstaff right now, so we opted to spend a little time seeing some of the sights. 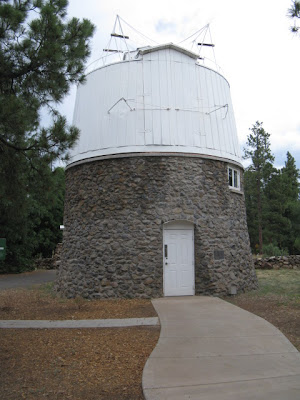 When Mr. Cactus was a young boy, he dreamt of becoming an astronaut.
He spent quite a bit of time in the 1960's glued to the T.V. set watching most of the Apollo launches.
That is why I thought he would especially enjoy a trip to the Lowell Observatory (established 1894) up on Mars Hill in Flagstaff.
Here in this little building in 1930, Clyde Tombough discovered the 9th Planet Pluto.
I remember doing a report on Pluto when I was in Elementary school, choosing this little known planet because it was the smallest and farthest away. Plus, I liked the dog named Pluto at Disneyland.
Until 2006 Pluto was considered a Planet, but with more discoveries of many object similar in size, it has now been reclassified as a "dwarf planet". 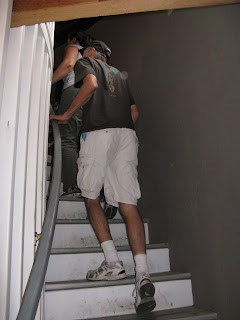 Little, narrow stairs take you up to the small room that houses the Pluto Telescope. 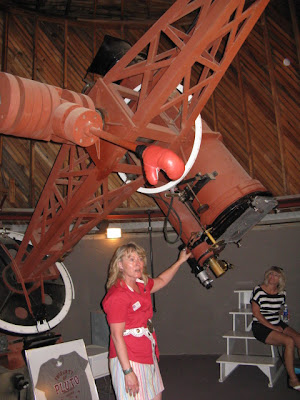 So amazing to stand right where history was made!
A guide was quite helpful in teaching us the story of the discovery of what was initially called Planet X.
The news of this new planet spread quickly throughout the world. The observatory asked for suggestions for a name, with the honors going to an 11 year old school girl from England who proposed Pluto, mythological God of the Underworld.
At that time many believed that Pluto represented the edge of the Solar System. 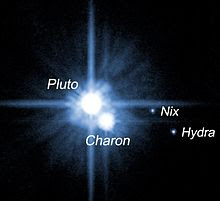 Lowell astronomers have been at the forefront of solar studies and recent discoveries.
As recently as 2005 two new moons were located orbiting around Pluto.
Because of Pluto's small mass, and long distance from Earth, in depth discoveries have been difficult.
The New Horizons Spacecraft, Mission to Pluto was launched in 2006, and is currently half way to it's destination, with an expected arrival of 2015.
I plan on sitting next to Mr. Cactus as I know he will be glued to the TV again as pictures and data is being sent back to Earth.
Tomorrow I will share with you a little more about the Lowell Observatory.
Posted by Nedra at 5:00 AM

What a fun little diversion! Thanks for the great info, Nedra.

My dad use to work on the apollos back in the day! We were also glued to the tv to see each launch and splashdown then visit them when they were back on earth in So. Cal. Sounds like you had a fun lil' side trip!

What a fun trip! Thanks for taking us along with you.

Hi Nedra,
My husband is an amateur astronomer who had the pleasure of meeting Clyde Tombaugh in 1989 - the year of Pluto's closest approach to the sun until ( well a long time from now in its orbit) He was a fine old man and I know how much Bruce enjoyed meeting him. Going to the Lowell Observatory would be lots of fun. I am looking forward to reading your next post. Thanks for sharing.
Regards,
Anna

Greg would so like to visit this place. He always looks in the night sky and actually knows things! I can pick out the Big Dipper but that is about all. Thanks for the info, Greg will enjoys this post too.

Ive been in Arizona 75 years and have never been to the Observtory! After reading your posts the event is on my "bucket list". Thanks for the information.