Fall is my favorite time of year. I love everything about it: the colors, the cooler temperatures, the wonderful smells of soups and stews wafting from the kitchen.
Fall is Pumpkins. Even though I love the beautiful hues of the traditional oranges found in most pumpkins, I have always been drawn to to the uniqueness of white pumpkins.

A few years ago when I was enmeshed in the art of primitive rug hooking, I made
Pumpkin Vines
(size 28" X 63") 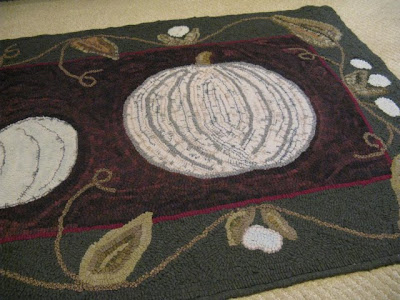 Pumpkin Vines is a design by Emma Lou Lais. 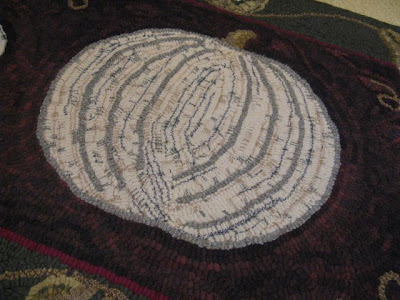 Emma Lou has been a leader in keeping the art of rug hooking alive in the United States. I had the privilege of taking several workshops from her when she came to a friends home here in Utah. 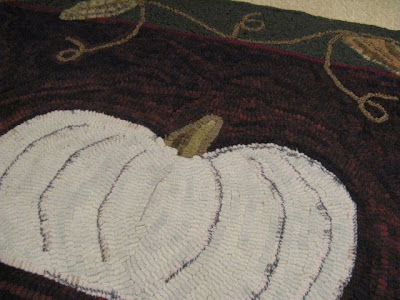 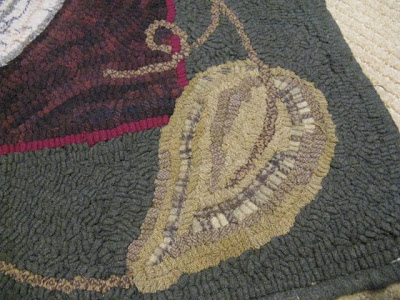 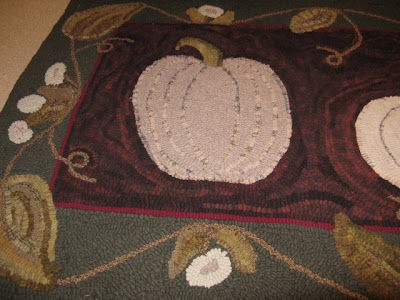 White pumpkins have the same taste and flavor as orange pumpkins, and can be substituted in recipes. 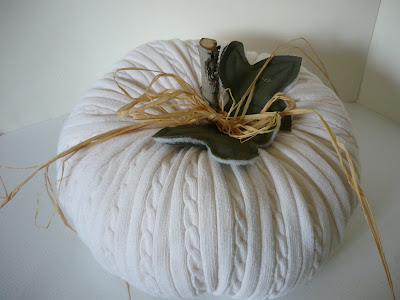 And if you would like to make this wonderful pumpkin out of recycled white sweaters, there is a free tutorial over on Small Fry & Co.
Posted by Nedra at 8:15 AM

I LOVE white pumpkins! Your rug is gorgeous, Nedra. I have a wool applique pumpkin table runner that I started years ago. You've inspired me to just pull it out and FINISH!

Great fall pumpkins there Nedra! I love the hooked rugs and that sweater pumpkin is so cool!

How wonderful! The rugs are just terrific. I love the recycled sweater pumpkin, too. I'll have to check that out and see what sweaters I might have available to recycle.

Nedra, I adore your hooked rugs. You have done beautiful work.
Mary

I love your rug!! Can't wait to make a sweater pumpkin. Your blog is so informative. Thanks for sharing.

Beautiful!! My friend Karen is a rug hooker and I am so fascinated by it. You did a wonderful job and the white pumpkins are gorgeous!

Gorgeous white pumpkins runner. And yes I would like to make one of the pumpkin from sweater. I have a perfect sweater for it - Thanks for sharing as always - Hugs Nat

Oh that is so beautiful. I have not hooked a rug in years. It is such fun to do.

I've never seen a white pumpkin, I'll have to keep an eye out but it's not that season here. I love the hooked rug, is anyone allowed to walk on it?

Your rug is absolutely wonderful! I have always wanted to learn rug hooking but boy, I can't smash another hobby's worth of supplies into this this right now. Someday....

The sweater pumpking is a hoot! Did you see the pumpkin Miss Carrie Nelson made out of a roll of toilet paper and a fat quarter? Too funny.

Oh, your rug is just lovely!