Recently I was invited to join a quilting group here in Arizona called Quilt Study Gathering, led by Lynn Miller.
The purpose of this group is to share, study and learn about 19th and 20th century antique quilts.
I've always had an interest in the history of quilting, and this group really has some talented and amazing women who generously share their indepth knowledge. 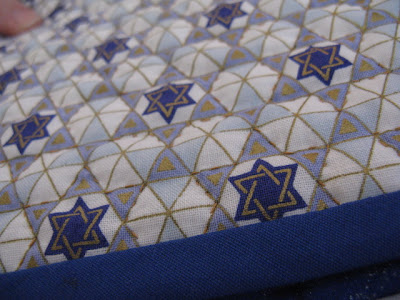 This month's meeting was led by Ferne Zabezensky, gatherer extroidanaire of all fabrics containing Jewish symbols. 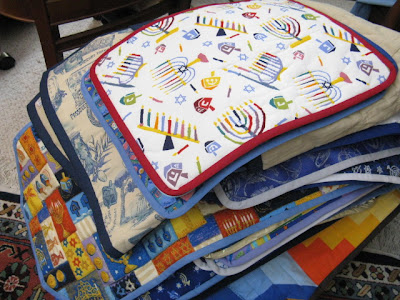 I had no idea there were so many published fabrics representing the Jewish culture and faith.
For years Ferne has collected well over 100 pieces. She takes a small sample of each fabric and makes them into placemats, and yes(!) she brought all 100+ to show us. 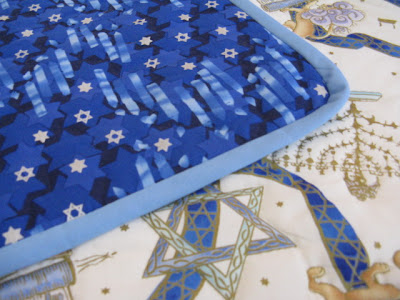 As Ferne displayed her fabrics, she presented a history of Jewish quilting in the United States.
We learned that the first Jewish community was formed in Manhatten in 1654.
The first known Jewish quilts in America were Baltimore Album beginning in 1840's featuring symbols such as the menorah, Star of David, birds nests or trees with 3 fallen fruit. 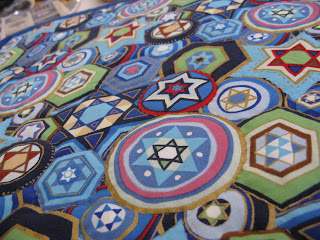 Ferne gave a rich history of the Jewish faith, explaining rituals (such as Shabbot, Havdalah and Bar Mitzvah) and major holiday symbols (including Purim, Passover, Sukkot, and Hannukkah). 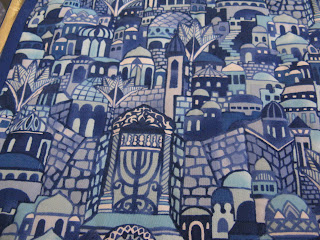 I gained a clearer perspective and appreciation of the faith and sacrifices of the Jewish people. 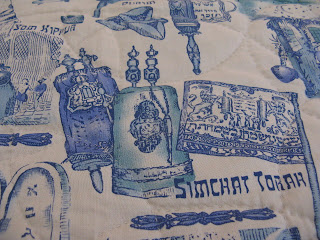 Such an impressive collection. I asked Ferne if she knew of anyone else in the United States collecting Jewish Symbolic fabrics. What a tribute if at a future date these fabrics were catagorized, photographed and placed in a book. 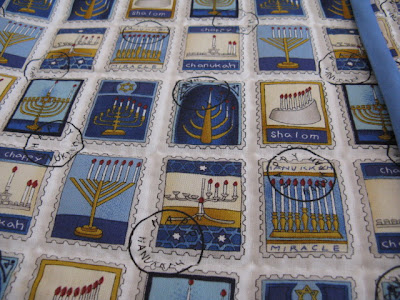 Ferne grew up in a small town Christian home in Indiana in the 1940's, where she knew of no other faiths except Protestants and Catholics. She attended college in Arizona, where she met her and married her husband, who was Jewish.
She began collecting Jewish symbolic fabrics with the desire to make handmade gifts for family members.
Now Ferne has 25 places in her home that she changes out 14 times a year with needlearts and quilts representing her faith.
Thank you Ferne for such a insightful and well prepared presentation.
Posted by Nedra at 9:00 AM

Isn't it interesting to gain perspective on other cultures and religions? I am always fasinated by such things. (sorry I can't spell today--brain dead)
Mary

The fabrics are fascinating... Thank you for posting this!