While driving home from the Grand Canyon last week, we went through the small town of Kanab, Utah (population around 3,700). We've been through Kanab many a time, but never really stopped. 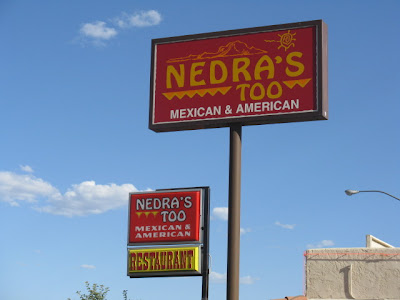 With a name like Nedra, how could we not stop at least once at Nedra's Restaurant? 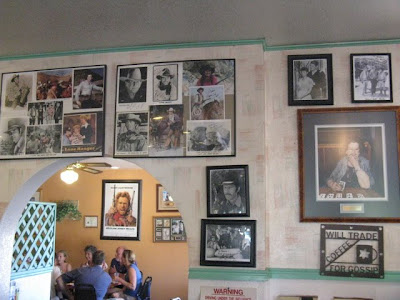 Begun in 1957, Nedra's was the favorite stop for countless movie stars and crews who filmed in this area.
More western movies and television programs have been filmed in Kanab than any other single location outside Hollywood. 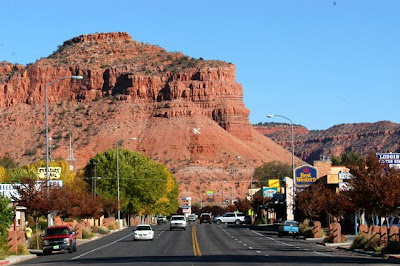 For such a sleepy little town, this place was quite the buzz during the Golden age of Hollywood.
Since the 1920's, hundreds of feature films and TV programs have been made in Kanab. Remember "Gunsmoke" or "The Lone Ranger"?
How about "Bandolero", "Planet of The Apes" or "The Outlaw Josie Wales"?
Not much filming has taken place since the 1990's, but the town is still full of movie memorabilia. 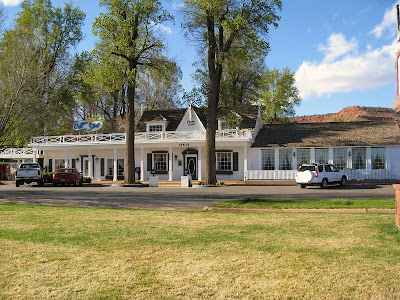 We walked through the Parry Lodge (founded 1931), a hotel that hosted 100's of the largest names in Hollywood including John Wayne, Frank Sinatra, Dean Martin, Sidney Portier, and Clint Eastwood to name a few. 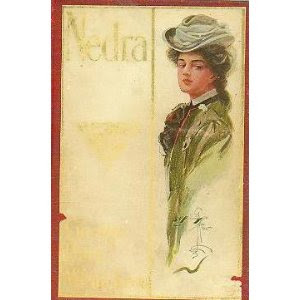 Many people have asked me how I received the name Nedra.
My grandmother read the book Nedra by George Barr McCutcheon (published 1905) about a young, rich couple in the early 20th century who attempt to elope to Manilla.
A storm sinks their cruise ship and they are marooned on the Island of Nedra. The native people of the Island are portrayed as savage cannibals who fall to the ground and worship the "White Gods" who have arrived.
Very dramatic.
After reading the book, my grandmother named my aunt Nedra, and in turn, my parents named me after my aunt.
I have a copy of an original edition of Nedra, a book I treasure. I have met very few people with my name, and growing up I often wished my parents had given me a more common name like Kathy or Susan. But now that I am a little older, I've grown accustomed to Nedra.
Posted by Nedra at 6:21 AM

Great little town! And what a wonderful story about how you were named. So neat to still have the book!

Of course you HAD to go to the restaurant with your name. Great story and I loved hearing how you got your name. Isn't it funny, I always hated being called Cathy, and wished I had a special name!!! I love the name Nedra, had never heard of it before I met you. xo

what a great story and how cool to be named Nedra! I hardly know much about my family so I'm always fascinated with people who know theirs. I think that's why I've always been a history buff. I just love reading about it. Thanks for the really interesting story. I'd love to see that place since I'm also a big fan of old movies.

What a delightful post! Love the history behind your name and the area you visited! Many thanks for taking us along on your travels!

Very interesting history there, on the town and your name!! But you never said if you liked the Mexican food at Nedra's? LOL

Wow, Nedra, what a great story! And a book named after you, how exciting! I think it's a lovely name!

You're famous!! Great story on how you got your name. When I was growing up I wanted my name to be Judy. lol

I love how you got your name. I love unique names and your name is great. It's better to have a different name than anyone else because people remember your name more easily. I have always complained to my mom that my name was so "old" and no one my age had that name, but what's fun is that no one I know my age and even in my high school years had my name. So, I knew if they said "Judi" they were talking to me.

I think your name is lovely. Cool you found a restraunt with your name. Kanab is a great little town.

Kanab is my home town. Loved growing up there. I had the chance to see a few of the celebrities that came to town...cast of Gunsmoke, Lurch from the Adams family, Daniel Boone cast members, Jed Clampett and few others. Once in a while they would put on a variety show for the townspeople. Of course in a place like Kanab, the LDS Church had the largest stage, so that is where they would perform. We would walk up and down the sidewalk in front of Parry's Lodge when we were teenagers hoping to get a glimpse of whoever was in town. My dream is to retire back in Kanab, close enough to St. George and all the shopping. I am a small town girl at heart.

Nedra is a lovely name but I have to tell you a funny thing that I thought of when I saw the title of your post.
My mom is a fabulous cook and she used to joke that there had to be a sign on the Highway outside the small city in which we lived that said " Bellamy's restaurant( that was my maiden last name( - turn here 3 miles down the road. We often had extras at our dinner table and my mom always had plenty for those guests. It doesn't happen so often now and she has found it a challenge to cook for just her and my dad. She grew up in a farming community and it was not uncommon to feed others a meal if they were there at meal time.
I expected you to say that you had lots of guests for dinner for the last few days and that you might have shared some of your menu.. LOL
I hope that that you had a fun time visiting the restaurant with your name.
My proper name is Anna Marie and I did not know anyone with my name until I was an adult. There were 3 of us with variations of it in a history class I took in college I(Anna Anna Marie and Ann Marie) Funny how that is- As an adult in blog land I have met a few other Anna's. My mother's ancestry is Swedish and Anna is a common name that is used in combination with other names.
Loved the post.
Regards,
Anna

Thanks for the tour of Kanab--how exciting that they named a restaurant after you! Our next door neighbors from the time I was 4 to about 10 were a wonderful family and the mom's name was Nedra. What a great story to how you came to have your name. Aren't you glad it is easy to spell!

Nedra's has always had good food. Did you eat there? Great pictures!

What a great story! You are the very first Nedra that I have ever heard of or met. I love your name and think that it fits you so well. That is too funny seeing your name on that sign. How cool!

What a romantic place and the name too. It took me back into those movies you mentioned. DH loves cowboy movies so I sat in for quite a few.
Hugs
Nat

Fascinating story about your great name. Great pictures and history of the area, too. I'm glad I stumbled upon your blog.

My parents named me after my Aunt Lottie. They used only the "L" (I'm glad) and I ended up with Lois. It's a great name. After all, I AM married to a Superman! ;)

Who'd known all that about Kanab. I don't think I've ever stopped in Kanab as well--I'll have to put that on my list of things to do...
Mary

I love your name. Nice to hear the history. I also wished I'd been given a more common name,but after 55 years I guess I like Charmaine!

I did post already, but I thought you might like this little bit of trivia. Back in the day, if you wanted to eat at Nedra's you had to drive south to Fredonia for a meal. My mother knew Nedra and she was big on supporting people in the communities in the area, so once in a while we would drive down for dinner. It was many years later that a cafe was opened in Kanab, thus the "Too". Nedra has since passed away, and my mother claims that it just isn't as good as when Nedra was in the kitchen.

Hello! Just a note to let you know I’ve awarded you the ‘One Lovely Blog’ award. Pop over to my blog to collect it. You’ll see a little blurb as to what I love about your blog too, I hope it makes you smile ; )

I have enjoyed reading your blog and was first attracted to it because my mother's name is Nedra also. After reading your post I searched for the Nedra book and ordered and original printing of it also. This weekend I was able to give it to my mother and she was elated! She said her mother had named her for a book she read... a story she had never told me before! Thanks for the mention of the book!